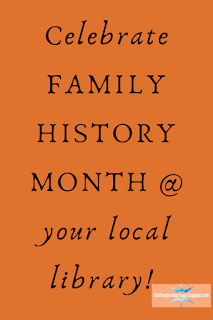 Family History Month...What does this mean to you?

For me, personally, this means cousins, reunions and family trees...BUT, my true passion is in encouraging others into discovering their family history.

And, that is exactly what made this past month a fantastic Family History Month!

I have been working as the adult services librarian at a small town library in Indiana for a little over four years. Because of my knowledge and passion for family history, I was put in charge of my library's Indiana/Genealogy Area.

I do have genealogy and history programs throughout the year, but really pile them on throughout October for Family History Month. The last few years has not had the greatest attendance.

Oh, and an added bonus...a past genealogy volunteer had such fun helping a patron during our first event that she decided to volunteer again!! Woo hoo!!

(And I used a much-loved photo of my great-grandmother and her family at a wedding as the backdrop for my flyer!) 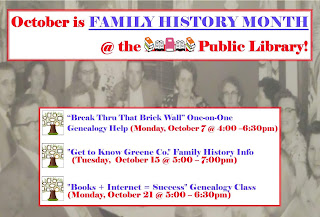 How to Top Off a Great Family History Month?

With a FAMILY REUNION, of course! 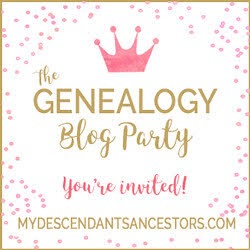 Tombstone Tuesday ~ What I learned @ a Cemetery Restoration Workshop 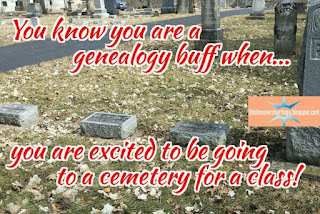 Recently, I have had the privilege of attending a Cemetery Restoration Workshop hosted by the Clay County Genealogical Society (Indiana). It was held at a local church, where we were able to immediately apply our new-found knowledge directly to their cemetery outside.

After signing in, receiving our goodie
bag of restoration supplies and eating a delicious breakfast, we settled in to learn a few things.
I apologize for the low quality of this photo. It puts the speaker in the shadows to the left. But I still wanted to include it to give kudos to her. Her name is Jeannie Regan-Dinius and she is with the

Division of Historic Preservation & Archeology within the Indiana Department of Natural Resources.

She was a great speaker, and filled us in on the laws regarding cemeteries in Indiana and the SHAARD database. SHAARD stands for State Historic Architecture and Archeology Research Database. It allows users to search for information regarding cemeteries and burial grounds, as well as historic buildings, sites and structures. Just go to SHAARD Database to learn more.

2. Second speakers of the day (Unable to take photos)

Wayne Langman and Jeff Dickerson were our next speakers.  They provided us with instructions on cleaning and repairing cemetery stones. In their materials, they provided a Suggested Cemetery Restoration Plan.

After another delicious meal, we took our cleaning materials to the historical section of the church cemetery to gain experience in cleaning and repairing the stones.

A few photos of participants putting our new-found knowledge to work. 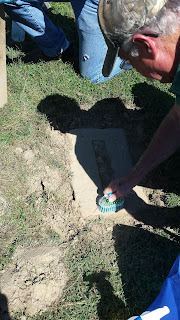 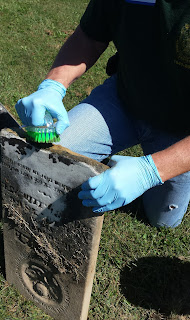 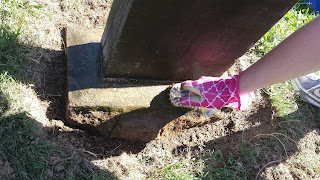 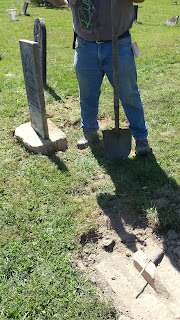 And last, but not least, a list of Cemetery Cleaning Tools is provided to help you get started on a cemetery restoration kit of your own.

Now, to take the knowledge and skills that I've gained, and put them to good use! I plan on hosting a workshop at my library workplace for local historians. And, hopefully, we will get started taking care of our local cemeteries soon!
By Diane at October 08, 2019 2 comments:

(Sunday’s Obituary is a daily genealogy prompt that can include an obituary and other information about a person, developed by Leslie Ann at Ancestors Live Here)

Have you ever had a brick wall  that you thought you would never break? The ancestor just seemed to appear out of nowhere, and start a direct line to your family?! 🔍🔍🔍

Mary Warner Severance was one of my biggest brick walls. In all my research on her, I had found maiden names of Warren, Warner and all kinds of variations. New York was always listed as the place of birth, but I could never find a town listed anywhere. And, last but not least, I had never heard of any children other than my great-grandmother, Frances.

Thanks to my genealogy angel and newly-discovered third cousin, Stephanie...I now have an obituary for my 2x-great grandmother, Mary Warner Severance!

It was taken from the Aurora Daily News (June 14, 1907, p. 15), and gives much of the information that I was missing. I also discovered four more children that I didn't know existed. The only drawback that I noticed in a 1907 obituary is the daughters lack their own names. Instead, you will notice they are all Mrs. (insert husband's name).

This is so much more information than I already had for Mary, so I would like to transcribe it below to make it searchable for others. 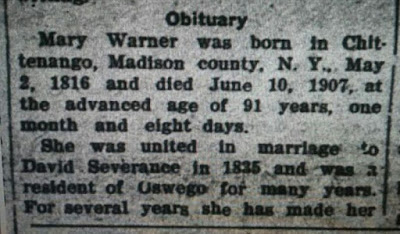 She was united in marriage to David Severance in 1835 and was a resident of Oswego for many years. For several years she has made her home with her daughter, Mrs. Orson Pearce, near Yorkville, where she received the best of care. All that loving hands could do was done for her comfort. She was a patient sufferer for months.

She leaves to mourn her loss four daughters and one son, Mrs. Edward Walker, of Indiana, Mrs. Jos. Hinchman, Mrs. Will Smith and Mrs. Orson Pearce of Oswego and Charles Severance.

The funeral was held at the house Tuesday afternoon and was largely attended. The floral offerings were exceedingly beautiful and profuse. The sermon was preached by Rev. G.A. Erving. The music was furnished by W.W. Church and Miss Lillian Nading. The pallbearers were the four grandsons, Gerald Pearce, Van Andrews, Clarence Smith and Loren Hinchman.