Through Her Eyes Thursday~"Inheritance" by Dani Shapiro

"Through Her Eyes" Thursday  is a genealogy prompt meant to help us see the world as our female ancestors would have. It's purpose is to encourage us to share things from the women's perspective of historical events.

Recently, I read an eye-opening memoir that explores a topic close to the heart of many women today: reproductive medicine and artificial insemination.

Inheritance: A Memoir of Genealogy, Paternity, and Love by Dani Shapiro explores this topic through the eyes of the person most affected: the child.

As a child, Dani always had the feeling of never quite fitting in with her family. However, she never quite knew why she felt that way. Several decades later, with the help of a DNA kit, she will have her answer.

But that answer opens up a Pandora's box of other questions for Dani. As you read her fascinating story, you get swept up in her search to find her identity, her history, her story.

Through her book, you will find that artificial insemination has a much longer history than most of us knew. We remember hearing in 1978 of Louise Brown, the world's first baby to be conceived via in vitro fertilization.

However, between Dani's book and an article I found, I discovered the history actually dates back to the early 1950's. According to an online article, "Artificial Insemination History: Hurdles and Milestones (Ombelet & Van Robays), the first successful human pregnancy was reported in 1953. "Considering the hostile climate for donor insemination at the time...it is not surprising that nearly a decade passed before the first successful birth...was announced in public."

And this is where Dani's story comes in...As a "donor-concieved person" born in the early 1960's, there was a lot of secrecy surrounding her conception and birth. Her parents lived in an era when this was a taboo and forbidden topic.

She spends a good portion of the book looking at what happened through our modern lenses.


"For a long while I was able to put myself in their shoes only as myself, product of the late twentieth and early twenty-first centuries, with all the biological, genetic, historical, and psychological tools available to me." (p. 222)

But once she was able to look at it through the eyes of her mother, and father, it changed her whole perspective of the situation.


"But now I was coming to the awareness that my young
parents-to-be had none of these tools." (p. 223)

Dani discovered in the writing of this book, what family historians and genealogists need to keep in mind. It is not our place to question how, or why, a decision was made by our ancestors. However, if we do, it has to be done from their perspective. 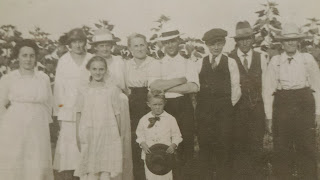 1.) What was the culture of their times/place?

2.) What information/tools would they have had at that time?

If you are looking for a good book to read, this is at the top of my list for anyone. But it is an exceptional read for historians,  genealogists and family historians! In an age where DNA and technology aid our research into the past, this book asks some very important questions. 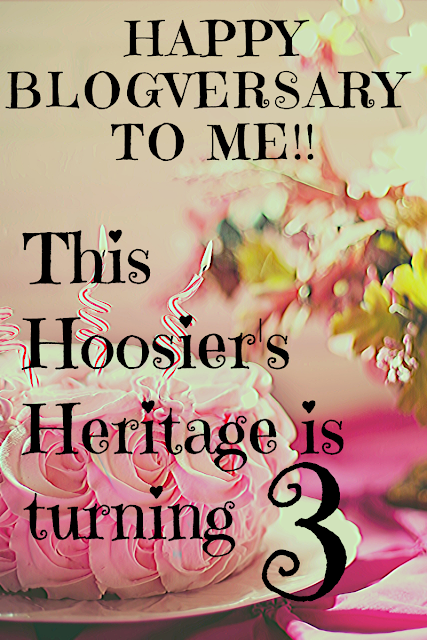 On March 23, 2017, I started This Hoosier's Heritage to write stories about my family's history, and to share stories relating to genealogy and history in general.

And, it has turned out to be such a blessing in my life! I have had such interesting conversations with my cousins regarding the family stories that I have shared! Also, I have met new relatives through the blog. All of this would not have happened without This Hoosier's Heritage!

The genealogy blogging community that I have found is phenomenal! Everyone has been so encouraging and helpful! Between Twitter and FB, I have been a part of very informative discussions, like #AncestryHour and #GenChat.

And, last but not least, I have won I have won the "Willie Puckerbrush Award for a humorous poem in the 10th Annual Great Genealogy Poetry Challenge, hosted by Bill West (https://westinnewengland.blogspot.com/)! If you would like to read the winning entry, you can find it here.

Hope you have enjoyed reading my posts! If you know of other people that would be interested, please share and encourage them to follow!
By Diane at March 23, 2020 4 comments:

As you delve into your genealogy, you discover that historical events were more than just names and dates in your textbook. They were real events that impacted the lives of real people.

Most of us encounter this fact when we look back at our ancestors going off to war, living through the Depression and more.

However, most of us do not think of a global pandemic affecting our families. For my Hillman ancestors, the 1918 Spanish Flu Pandemic was much more than a news headline.

This family photo was taken around the turn of the century, based on the age of baby Edna. My great-grandmother, Carrie, is surrounded by her siblings and parents.


The years pass, and Lillian meets a handsome man by the name of John Anthony Maffey. Their thoughts turn to love, and they soon decide to get married.


With Lillian's brother, George, overseas in Europe as part of the Rainbow Division in World War I, I am sure the newlyweds followed the headlines in the newspaper.

But, I do wonder if they looked past the war news, and caught the beginnings of what would later be known as the Spanish Flu.

According to Wikipedia, the 1918 influenza pandemic began in January 1918,  only a month after John and Lillian married.

In those first months of marriage, I'm sure they paid more attention to each other than to the world around them. Lillian left her job as a clerk, and took care of their home. John continued working as a motorman in Cincinnati.

Tragically, the world news would come crashing into their world in the month of October 1918. Lillian was seen by a doctor at General Hospital in Cincinnati on October 16th, and by October 17th she died of broncho-pneumonia following influenza, according to her death certificate. 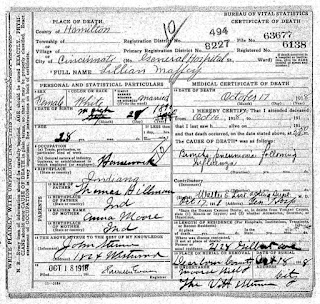 A short ten months after becoming man and wife, Lillian's life is tragically cut short and John is left a widow.

My great-grandmother and her siblings lost a sister, and their parents lost a daughter.

A life cut short, our family never had the chance to meet this beautiful lady.

Has the Spanish Flu touched your family history? Do you have a story to tell?