Throughout history, the stories of our ancestors have been told mostly from the men's point of view. In many instances, the women and their accomplishments, perspectives and so much more have been cast aside.

So, in order to see the world as our female ancestors would have, I am starting a new prompt. I would love for you to join me!!

What would be included within this writing prompt?

The first two photos are examples of what could be included of historical events shown from a woman's perspective.

Photos, like the one below, would have been cast to the side for more of the likes of male aviators, such as Charles Lindbergh; even though there were many female pilots over the years.

We have seen photos of women of the suffrage movement and their rallies. But have you looked closely into the eyes of one of these women, and tried to imagine all the reasons she would stand on the front lines like this? How did she view the world in which she lived?


Our Female Ancestors and Looking Through Her Eyes

Although I have never shied away from telling the stories of my female ancestors here, I can honestly say that I hadn't looked at the world through their eyes either.

What is my grandmother thinking in this photo? In another year or so, she would be married to my grandfather. Had she already met him, and was in love? Was she even thinking of the future, or just loving life? The grandma I knew wouldn't have posed for a photo like this. Who was this woman? 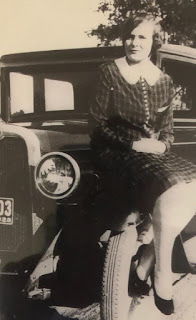 I was fortunate enough to be around Grandma Ethel for over 40 years, and my Great-Grandma Carrie for 12 years. It wasn't until recently that I would look at these two photos below, and realize that I was looking into the eyes of a woman who saw her newlywed sister pass away during the flu epidemic, her brother go off to WW I & four of her sons to WW II. She had already become a widow by this time. Her four sons had returned home from the war, only for one of them to pass away three years later. 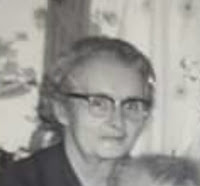 As she holds her grandchildren in these photos, it is hard to imagine all the changes she had  already seen in the world. By the time she had passed away in the 1970's, the news of the day had covered the Wright Brothers and the Moon Landing! 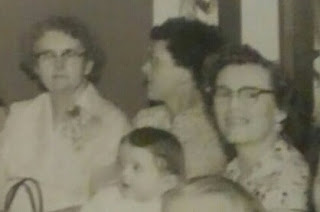 How to Participate in "Through Her Eyes" Thursday

If you are looking for a prompt to help bring life to your ancestors' stories, consider using "Through Her Eyes" Thursday!